Click this text to start editing. This block is great for showcasing a particular feature or aspect of your business. It could be a signature product, an image of your entire staff, an image or your physical location, etc. Double click the image to customize it. 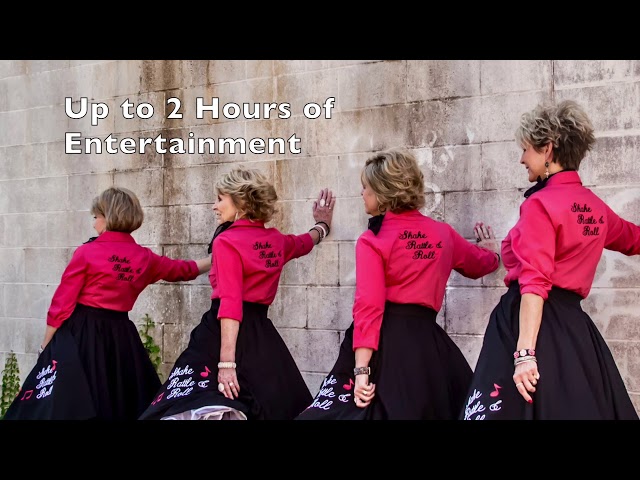 National - International and Award Winning 50's & 60's Tribute Show Group"Shake Rattle & Roll"  will make you stop, drop and roll with laughter as they take you back to a time of innocence with their  beautiful harmony, choreographed moves, comedy and hula hooping skills.

"Shake Rattle & Roll has entertained at venues such as "Texas Country Music Hall of Fame" the "Columbia Space Shuttle Project", Elvis week in Memphis, Tent,  State Fair of Texas", as well as in the states of Missouri, Arkansas, Louisiana, Las Vegas, NV,  New Jersey  Theater at the Park, and Hall of the Inn Krone Zorbas, Bad Nauheim, Germany, Redneck Heaven, Freldback, Switzerland, and other venues.

To start on this website, click the "Add Content" button on the left and start dragging and dropping blocks to the page. You can delete the ones that are already here.